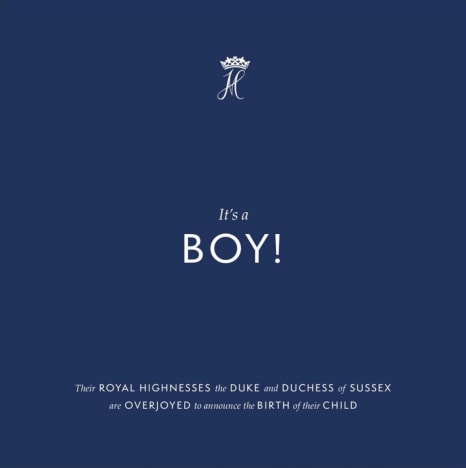 Did you know that almost a year after Prince Harry and Meghan Markle got married, they had a little baby boy? May 6, 2019 was the birth of the new baby. He was 7 pounds, 3 ounces, and very healthy! People found out about this on Instagram on Prince Harry and Meghan Markle’s account. This news was also revealed on a sign posted on the front doors of Buckingham Palace. The name of the royal baby is Archie Harrison Mountbatten-Windsor. Archie is a nickname for Archibald. Archibald means bold, genuine, and brave. Archibald’s second name, is Harrison, which means “son of Harry,” is named after Prince Harry. People thought Archibald’s first name would be something different than it was because most royal babies were named after important British people in the past. A lot of people guessed the baby would be named Alexander, Spencer, James, Arthur, and also Theodore. But Prince Harry and Meghan Markle were happy with what name they chose. They didn’t stick to the tradition of naming the baby on a previous British person, they stuck to other traditions to make up. One of those “other traditions” included showing the baby to Archibald’s great-grandmother, 93-year-old Queen Elizabeth II, and her husband, 97-year-old Prince Philip. Archie is the seventh in line for the throne. He’s after Prince Charles, Prince William, and his three children, and Prince Harry! Though prince Harry is not likely to ever be king, they put hime in the line anyway.

I chose this article because:

1: Because this was the most recent article when I did it.

2: Because it looked really interesting and cute.