I have been working on my final product for about three weeks. For my final presentation, I am doing a TED talk with a slideshow in the background.

We had to create a script. Creating a script was very simple for me. I also had a lot of fun doing it. In my script I included the educational purposes, the ingredients, the benefits, explained why the most popular age group uses Play-Doh the most, the history and original use.

In my slideshow I included a lot of pictures. Creating a slideshow was also very simple for me. It didn’t take me very long to figure out how I was going to create my slides.

Read my previous posts and wait for upcoming posts to learn more about Capstone and my experience.

Answering my main inquiry question is the whole point of the project and I did that after a lot of hard work. It was definitely hard explaining it.

I have learned a lot while doing this project. Play Doh definitely has a lot more to it than you think.

Finding a site visit was a big challenge. Having my Play Doh (my topic) only be made in China, is pretty hard to substitute and work around but I think I managed too.

In place of a traditional site visit, going to the place and taking pictures, I did something a little different. My teacher asked me if I wanted to do a class activity and I did. So, I came up with an experiment to do that involved Play Doh. I decided to test and see if Play Doh conducted electricity.

I had made Play Doh at my house the night before and was going to use that for the experiment. My teacher and I got the tools needed like batteries, battery holders, LED lights, and wire. I taught and observed the class while my teacher helped to document the work while taking videos and notes.

It turns out that Play Doh does conduct electricity! It was a lot of fun to do the experiment and I am very proud with how it turned out.

This week, I had my interview. A lot of my questions were answered but I was still left hanging for some of them…

Finding an interview was a little complicated. It took a while to find someone to contact. I got a lot of help from my teacher who actually arranged my interview and our amazing intern who took notes for me during the interview. It took a little while to get in contact because Play-Doh is made in Hong Kong! The person that we emailed did not answered after several approaches. I got tired of waiting so my teacher called the company Hasbro who makes Play-Doh.

The person I talked to over the phone was an intern who took phone calls, answered questions, and gave replacement parts. I learned that Play-Doh hasn’t changed much except for the fact that they had produced more play sets and colors. Otherwise Play-Doh has not changed very much. The ingredients in Play-Doh are very simple. There is wheat, water, salt, and other common ingredients. The most common ages that use Play-Doh is ages 5-10 years old. My interviewee gave me all of the information that he knew and could gather. He was very helpful and patient.

Recently, I just finished creating my main inquiry and sub questions. I This step was a little complicated for me because I had no idea where to start.

For my main inquiry question I came up with “What is the science behind Play-Doh; how is it more than just a toy for kids?” I am very proud with how my main inquiry question came along with my five sub questions. My five sub questions took a while to come up with but after a couple of mind maps, I finally decided on what I wanted them to be. Now it was time to put together an interview. My teacher and I did a little bit of research and found out that the Play-Doh factory was in Hong Kong! My teacher emailed them and asked if we could do and interview via email. Now all we have to do is wait.

I got a lot of help with my teacher and our student intern coming up with sub questions and finding an interview. I know I will need a little bit more guidance from some adults figuring out what my next steps are. Otherwise, I think my Capstone it coming along great so far!

For the next couple of weeks, the whole fifth grade participates in, Capstone. This project is an inquiry-based project which means it starts with a question. You pick a topic, research it, and make a presentation. These projects always look incredible and they are really inspiring. I chose Play-Doh and here is my thinking and the process to where we are now…

It was a little complicated deciding on my topic because their are so many things to choose from. At first I was leaning toward doing crayons but I don’t think I was going to be able to stick with it for a whole six weeks. I was playing with Play-Doh and I realized I wanted to learn about it. What is the science behind Play-Doh? That is how I found my topic and my main research question.

I found “mind maps” really helpful for finding my sub questions. To make a mind map, you write the topic on a piece of paper and break it down. For example, I wanted to learn about the science behind Play-Doh. Then, I had to figure out I made only one I that is how I found my five sub-questions.

END_OF_DOCUMENT_TOKEN_TO_BE_REPLACED

My Rube Goldberg team consists of Julia, Tessa, me. For this project, my team has to create a seven to ten step Rube Goldberg machine that in the end will complete a simple task.

So far, we have discovered and tried three different attempts on creating our Rube Goldberg machine. Our first attempt came out a little to much like a fantasy and it was not very realistic. For example, one of the steps was supposed to have a can send a basketball rolling and then knock a water bottle off of a table. It must include a lot of force that the can did not have.

Our second attempt had contained some good and some, not so good steps. This led us to our third design. We were extra careful choosing the steps for this design. We took some of the steps from the first and second design and came up with the rest.

END_OF_DOCUMENT_TOKEN_TO_BE_REPLACED

My class decided to interview one another to learn more about the arcade. The video is an interview of my friend and I, the creators of Human-Whack-A-Mole telling the interviewer, Julia the steps behind our game and all of the creative thinking! 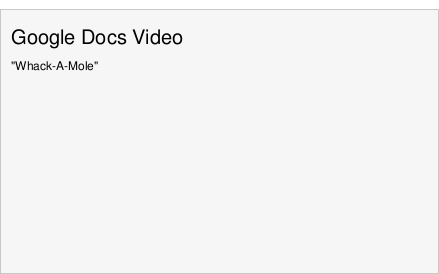 20% time in my class is a time to let our creative ideas out and almost all of us are working on the arcade games. Our arcade contains the classic arcade games such as Skee ball and some made up games. We also use the classic arcade games like Whack-A-Mole and change it up a bit to make it unique and our own. One cool thing about our class arcade is that our games are made up of school supplies like pencil packages but also some more durable materials for stands like cardboard and styrofoam. One out of the many exciting parts of the arcade is that we get to make and 3D print our own designs. Every second someone is coming up with a new idea to help devopling a new game for the arcade.  Our arcade is growing and taking over our whole classroom! Everyone has something that they are working on and the game that has been my priority is Human Whack-A-Mole!

The picture above is our Whack-A-Mole game before it was painted. The two students “moles” stand inside of a box bouncing up and down while holding paddles with targets drawn onto them. The contestants have three paper balls that they throw and try to hit the target. You can score tickets depending on what part of the target is hit. Even if you aren’t the best at throwing this game is till extremely fun! This game is a one of a kind awesome a fun game only found in our classroom.

Another game that my class has made is Skee Ball. It may not be made out of fancy material but it still is loads of fun and has the same idea. The contestant has a ball and rolls it up the ramp and try and get it a hole. Each hole is worth a different amount of points. Once you get it in the hole the monitor will hit a buzzer. Depending on what hole the ball lands in you get points and tickets.

The picture above is an online program, Tinkercad. On the program you can design 3D designs to print. My class used Tinkercad to make games and prizes for the arcade. For example, a couple of students 3D printed a trophy as a prize if you get a certain amount of points from Human-Whack-A-Mole. Tinkercad is super cool to play and mess around with every if you don’t actually get to print it!

Another important part of the arcade, is the tickets. You can’t have an arcade without tickets! This tickets are handmade and look really cool. They are original and really bring the arcade together. I love these tickets because you won’t find tickets anywhere near as cool as these. The colors choosen are really bright and attract attention.

My class has worked really hard to make this arcade. We get ideas out of our fails and look for inspiration. It started with a little game of ring toss made out of dried out markers and duct tape and grew into Whack-A-Mole for example, made out of a huge cardboard box with people. I am so excited to see the final product of our arcade!

This week, we got free write. So we could write about anything we wanted to. Of course with the crazy weather – no snow and all – that’s what I would be writing about. I love this piece of writing.

It is the middle of January and there hasn’t been any real snow. Maybe a small flurry here and there but no snow! I want it to rain snow, pour snow, snow snow I want to have a snowy day. A day with so much snow that school is canceled.

I love waking up in the morning from the phone ringing to say school is canceled. Then, jumping out of bed and running to wake up my older brother so we can play in the snow. I really want it to snow but I want to have the good packing snow, the kind that is good for making snowballs and forts! I was hoping for it to snow on my birthday which is in early January. Unfortunately, it didn’t and I am still waiting for a pretty white coating on the tree tops and the ground.
I really want it to snow. I only want it to snow one day, and then again about a week later because it isn’t any fun being house bound for too long! But I don’t want it to snow in March. So there are only two more months for the perfect snow day!